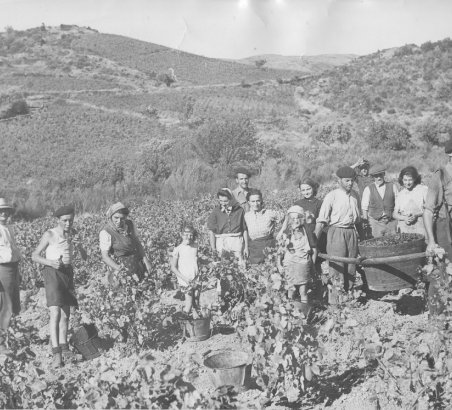 « I was born here! But I also left for a while. I was an accountant. When I was a student I found a job in a company where I worked for seven years, but it didn’t go very well. Then my grandparents’ vineyards became available so I took them over. My father had rented them out, so there was a skip in generation, but I took them up in 1998. To start with, it was simply a way of getting out of the company I had worked for, but now I am very happy. I had always lived in the world of winegrowing as my family had always been involved in it. So I already knew the work without having to learn it. My accounting background has helped me a lot in managing the vineyard. My friends, family, everyone came to help me, but I already knew how to prune, drive a tractor and various other things, before I set myself up. I remember when I was a kid, when it came to planting or even ploughing, a whole group of people used to go. When a vineyard was being planted, a group of about ten people went and they spent weeks planting. There was a whole team with Pierre Michel, Pierre Trinquier, Gabriel… they helped each other plant. All the grenache and syrah had to be planted. Afterwards, they would often get together for a good lunch. When I first took over the family vineyards, they helped me for three or four years and then I got into it. I could always go to them for advice or the Board at the Cooperative. My father also helped me a little at the beginning. To start with I had 10 hectares, now I have 25. I bought up vineyards or rented them. I had to renew a lot of the family vineyards and the rented ones when possible.

Our parents and grand-parents didn’t push us to go into winegrowing as it’s true that it was difficult, the fact that we became an appellation, the motivation of some folk… But the fact that the wine cooperative was doing well and still is for that matter, encouraged people to stay. The income per hectare is quite good today, and allows you to make a living. It wasn’t easy at the beginning. I set up 17 or 18 years ago and I had to replant the vineyards with better grape varieties and I am only now starting to make a better living. But I don’t regret making that choice!

I know that in my family, everyone was a winegrower and all of them belonged to the cooperative from the start. It was mostly the small growers that grouped together. There were two or three large operations in the village – the cellars still exist. But at my grandparents’, there were only three tanks for the whole family for the harvest and back then it was a big one! I think people wanted to stand out as we were a bit isolated. In Cabrières, we are in the foothills of the mountains, Fontès is more on the plain. Cabrières is a bit enclosed - as soon as you get out of it, you are on the plain and it’s flat, there are no more slopes like here. We have always wanted to stand out here and to fight to get there”.